The second webinar of the series “Recovery through community-led approaches” focused on “Communities in circles: new forms of development”. It was organised by LDnet in partnership with AEIDL (the European Association for the Information on Local Development). It was organised with the support of AEIDL and FARNET and contributions from URBACT projects, and attended by some 50 participants.

The recording of the webinar is available HERE.

In her introductory comment, Maria João Filgueiras Rauch stressed the importance of circular economy for a sustainable future and pointed out that it can develop particularly well using community-led approaches. She also said circularity is not limited to production and usage of goods, but is also relevant at the level of collaboration between different actors. 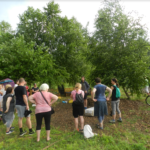 Daniela Patti, Managing Director at Eutropian, presented two examples of how cities can stimulate circular processes with the involvements of citizens and NGOs. In Rome, the Cooperative City project “Rethinking Food Markets” helps bring back to life urban food markets not only as a place to get fresh sustainably produced food (capitalising on the fact that half of Rome’s inhabitants has one of these markets within 10 minutes’ distance), but also for non-commercial activities such as NGO educational initiatives for circular economy – see VIDEO. In Maribor (Slovenia) all utility companies cooperate on finding new use for different types of municipal waste (e.g. to produce soil for community gardens). 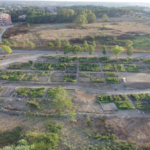 Fiammetta Curcio, independent expert, presented the experience of the Ru:rban project – practices and networks of urban resilience. The participating cities across the EU (with Rome as lead partner) share practices of urban gardens as a tool for social inclusion (food for people in need, opportunities for work and therapy for migrants or people with disabilities) as well as a way to bring life to abandoned areas or underutilised public spaces. Developing rules for such gardens in a bottom-up way makes them more acceptable. The project helped some participating cities (e.g.Cracow) overcome the initial lack of trust between authorities and NGOs and develop new types of activities (e.g. school gardens) – see VIDEO. 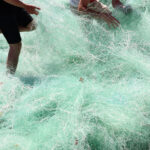 Richard Freeman, from AEIDL and FARNET, reminded participants of the need to move away from a “linear economy” to a “circular” one, where waste from one type of activity can become input for another activity and the use of primary resources can be reduced. He presented the example of the project “Fil & Fab” supported by the Fisheries Local Action Group from Brest (France). Thanks to cooperation of different actors, including the fishing sector, a social enterprise, various public entities etc., a system to collect used fishing nets (initially from Brittany, later reaching out further) was created and an innovative method of processing the plastic into nylon pellets was developed. 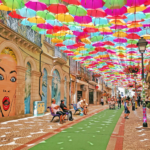 Célia Laranjeira from the municipality of Águeda (Portugal) described an URBACT cooperation project in which arts and culture help mobilise communities to take innovative action to reduce CO2 emissions and recycle waste materials (e.g. using waste to produce new city sculptures). The participatory character of these initiatives is assured through the URBACT Local Group (ULG) which brings together cultural, environmental and other community stakeholders – see VIDEO.

In the discussion which followed these examples, participants raised the following issues:

It was also mentioned that URBACT has developed a methodology for transferring practices (see Guide), while FARNET has a tool to support finding cooperation partners for FLAGs.

LDnet is an informal network set up in 2011 to bring together knowledge and people in local development. People who wish to make a contribution to local development can participate in the network. LDnet is supported by the non-profit LEDA-LDnet Association. The aim of the Association is "to develop and spread knowledge and expertise enabling … END_OF_DOCUMENT_TOKEN_TO_BE_REPLACED