CLLD is more often associated with a rural or fisheries context. In this paper by Pietro Verga deals with ‘urban CLLD’, which builds on experiences, particularly, from the URBAN Initiatives and the LEADER programme. His research is based in Berlin and is within the policy context of the German Soziale Stadt programme (Socially Integrative City, SIC).

Fostering both physical rehabilitation and social, cultural, and employment goals, SIC intends to improve both living conditions and the attractiveness of neighbourhoods by the creation of stable social structures and the enhancement of life opportunities for residents in the fields of education, employment, social and ethnic integration.

In the specific case of Berlin, the national SIC framework is put into practice through the Soziale Stadt Berlin (SIC Berlin) programme, which has unique features compared to other German cities, especially concerning the way target areas are identified and the scheme for citizens’ participation adopted.

The specific target area of the research is the Körnerpark neighbourhood (or Körnerkiez), in the District of Neukölln, in the southwest part of Berlin. The Körnerkiez has been for several years a very neglected neighbourhood, characterised by high rates of unemployment and welfare dependency and by a high concentration of ethnic minorities.

The paper explores how far the strategy pursued is capable of addressing local needs and discusses issues of inclusiveness in the local governance framework, arising from the Körnerpark experience, which highlighted that in the practice, a community-led development initiative may risk to be captured by a dominating coalition of stakeholders, and to achieve results far distant from the redressing of social imbalances and inequalities. 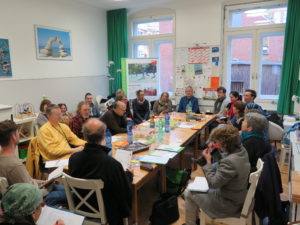 The Community-Led Local Development (CLLD) is a new area-based instrument launched for the 2014-2020 Programming Period of the European Cohesion Policy (ECP). It is intended to be a powerful instrument to address, at sub-regional level, crisis-related and other externally-induced issues, as well as to contribute achieving the smart, sustainable and inclusive growth objectives of the Europe 2020 Strategy. Nevertheless, concerns emerged with respect to the openness and accessibility of the CLLD’s local governance framework, the scope and goals that would be targeted by local partnerships, and the suitability and effectiveness of the CLLD’s area-based approach in tackling local deprivation.

With my contribution I address such concerns from an evidence-based perspective, in order to draw from the practice compelling insights for the improvement of the CLLD instrument. To do so, my paper brings a critical analysis of a recent ERDF co-financed local development programme, namely the Körnerpark Neighbourhood Management in Berlin, whose principles and features are strongly comparable with the approach underlying the CLLD, and which has indeed been taken as a model practice by EU policy-makers.

Relying on several interviews to key actors at different governance levels, socio-economic data, documents analysis, and field observations, I conduct an assessment of the case-study focussing on the inclusiveness of its governance framework as well as on its capability to enhance residents’ living conditions.  From this assessment, I then infer a number of crucial issues that are likely to be a common challenge for any initiative implemented under the new framework. In particular, I argue that two main lessons can be learned from my case-study. On the one hand participatory decision-making bodies at local level might not be effectively representative of the socio-economic composition of the target community, but rather risk to be dominated by local elites or powerful groups. On the other hand, fostering local development bears the risk that the most disadvantaged population of the target community might not be fully supported by the initiative but rather, to a certain extent, even penalised.

On these grounds, then, my contribution aims at stimulating the debate among European policy-makers towards the fine-tuning of the instrument as a means to effectively tackle poverty and marginality in lagging areas and foster their sustainable development.

LDnet is an informal network set up in 2011 to bring together knowledge and people in local development. People who wish to make a contribution to local development can participate in the network. LDnet is supported by the non-profit LEDA-LDnet Association. The aim of the Association is "to develop and spread knowledge and expertise enabling … END_OF_DOCUMENT_TOKEN_TO_BE_REPLACED