The OECD Local Development Forum 15-17 June 2022, Cork, Ireland. It will be an in-person event with live streaming of selected sessions.

This year’s Local Development Forum will mark the occasion of the 40th Anniversary of the OECD’s Local Employment and Economic Development and will debate the issues needed to create “Better strategies for stronger communities”.

For more information, including the agenda of the event and how to register, click HERE. 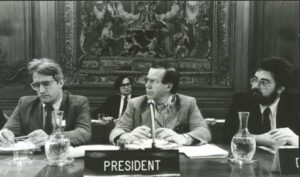 The OECD website offers a very interesting brief history of the creation and evolution of programme over 40 years.

Four decades ago, OECD governments were facing a jobs crisis. As the 1982 OECD Economic Outlook described, “the rise in unemployment over the last three years has been severe, and in Europe, it has seemed inexorable”.

In response, the French government proposed the creation of a new programme to learn from the types of innovative approaches to local job creation that were appearing across OECD countries, particularly in light of entrenched challenges in some communities.

Twelve countries plus the Commission of the European Communities joined the call, and the OECD co-operative programme on local development was born. In 1982 it was called “Local Initiatives for Employment Programme” (LEI/ILE). A few stages later, in 1987, it was officially renamed “the Co-operative Action Programme on Local Economic and Employment Development” (LEED).

Many other developments have followed, including the Creation of the LEED Forum through the merger of three consultative groups the Forum on Cities and Regions, the Forum on Social Innovations and the Forum on Entrepreneurship, and the establishment of the Trento Centre for Local Development.

From LEI/ILE to CLLD in the EU

While the above brief history of the LEED programme traces its evolution within the OECD over the last 40 years, it’s worth remembering that much has happened within the EU context, from the same starting point.

The European Commission (DG EMPL) was a partner of the LEI/ILE programme and went on to launch in 1986 a full scale action-research programme entitled LEDA (Local Employment Development Action Programme). LEDA worked with a network of urban and rural localities throughout the EU and later on in Central European countries, going beyond learning from stand-alone local employment initiatives and distilling local experiences in local development strategies led by local partnerships.

This approach was introduced in EU funding programmes in 1991 with the LEADER programme (DG AGRI), which went on to codify the bottom-up approach to local development. This evolution has continued with CLLD (Community-led Local Development) offering, since 2014, opportunities for multi-funded approaches in both rural and urban contexts in the EU.

LDnet is an informal network set up in 2011 to bring together knowledge and people in local development. People who wish to make a contribution to local development can participate in the network. LDnet is supported by the non-profit LEDA-LDnet Association. The aim of the Association is "to develop and spread knowledge and expertise enabling … END_OF_DOCUMENT_TOKEN_TO_BE_REPLACED